Modern man requires around 2,500 calories each day to maintain body weight, women require slightly less.  In the prisons of the 1800's, a prisoner was lucky to obtain 500 calories per day without any opportunity to increase his intake. Overcrowding – three to a cell built for one and hard labour, soon consumed what little energy the prisoner had.  Poor health, body lice and unsanitary conditions all led to the onset of jail fever – epidemic typhus.

Today, as well as obtaining a balanced and healthy prison diet, a prisoner can supplement his diet from the prison shop.  Many prisoners are housed in single cells or dormitories and the overcrowding problems of the 1800's no longer exist in our modern prisons.  Modern health care programmes, physical fitness programmes and  modern sanitary conditions have all been introduced in recent years.

In the UK, a prison catering manager has about £1.87 ($4) to provide food for each inmate every day.  Young offender institutions are allowed double this amount at £3.81 ($8) per day.  The modern prison service of today has placed an emphasis on rehabilitation, although how successful this has been is debatable.  Part of the rehabilitation process is to teach prisoners how to eat healthily and look after themselves on release.  For the prison service's part, new dietary regulations have been introduced in recent years which avoid the onset of health problems which ultimately reflect in the prisons health care budget.  Long term prisoners are particularly at risk by poor diet and poor health care regimes.  Diabetes, stroke and obesity-related illnesses are of particular concern.

Special diets are catered for now, and include Muslim, kosher, Caribbean, diabetic and other medical diets are also provided.  Catering managers are now specially trained to prepare these special diets.

In many of the establishments I worked in, we even had Muslim and Jewish prisoners working in the kitchen to ensure that the food was cooked and prepared in the appropriate way. For the feast of Eid, the local mosques would deliver specially prepared food as a gift for Muslim prisoners.  Likewise,  the rabbi would arrange for kosher food to be delivered whenever Jewish feast days were celebrated. This would never have happened fifty years ago.  It is also curios to note, the number of prisoners who convert to Islam when Ramadan is approaching. 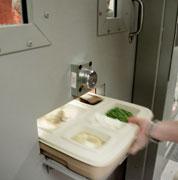 So how have the diets and menus changed over the years.  Health and nutrition remain a high priority in today's prison kitchen.  There has been a vast reduction in fried foods over recent years.  Chips with everything no longer applies. An increase in fresh fruit and vegetables, wholegrain products and an increase in fish products, including oily fish have been introduced into prisons not only in Britain but in European and American prison establishments as well.

One of the best fed prisons in the world is in Italy, where prisoners work to produce organic fruit and vegetables, including olive oil.  The prison has its own state of the art food production areas for manufacturing wine and orchard management.  The whole operation is supervised by a professional management team.  The prisoners benefit by eating all their own home grown food and are even allowed a small wine allowance to help reduce cholesterol levels and may even increase the ability to prevent some forms of cancer.  Now, is that progress or what?

There seems to be some confusion as to what exactly prison food entails.  As far as the general public is concerned, some of them still believe that gruel, bread and water is still the main prison diet.  There are still many more who say that it should be.

They could not be further from the fact.  As we have already stated, vast improvements have already been made to the prison diet.  In most prisons in England and Wales, the supply of catering facilities has been privatised.  Prisoners now have a choice which they can preselect on a weekly basis, usually with a choice of three or more main courses. The Christmas menus have improved immensely over the years and now provide prisoners with a much better Christmas dinner than they ever would eat outside prison.  In many of the lower security prisons, local pensioners are invited into the prison to eat Christmas dinner with the inmates.  After all, prisoners are still human beings and many take great pains to ensure that 'granny' and 'granddad' have a nice Christmas dinner.

So how might a modern prison menu look?  First, the breakfast menu.  In all English prisons each prisoner receives a breakfast pack which is issued the evening before for use the next morning.  This will include a breakfast cereal, milk, tea bags, coffee whitener, sugar, brown or white bread, jam and margarine or butter type spread.  They will also receive a weekly allowance of teabags and sugar to make themselves a cup of tea whenever they want to.  Each cell will have its own kettle, or at least a boiler on each landing for the use of all prisoners.  The daily issue will also include special packs for vegans, vegetarians and various religious groups.

For the midday and evening meals, nearly every prison now uses a pre-select system where a list of different meals are displayed for each day and every prisoner can order whatever meal he prefers.  There are usually five or six alternatives to choose from.  Fresh vegetables and fruit are served separately when each meal is collected.

The following is just a sample obtained from the London prisons where the pre-select system has successfully been in operation for nearly ten years:

The pre-select system has progressed a long way since its introduction.  Prisoners now have the opportunity to select from a range of choices.  In the early days if you were not a registered vegetarian, you could not have a vegetarian meal.  If you were not a Muslim, you couldn’t select a halal dish.  Now, things have changed  Prisoners can select whatever dish they prefer.  They may eat vegetarian one day, halal the next.  Its their choice.  In general, all prisons have now attempted to embrace the Balance of Good Health model (Food Standards Agency 2001) and are providing a nutritionally balanced, and healthy diet.

We have progressed a long way from the days of bread and water and a cup of gruel.  Prisoners are not dying of typhus and malnutrition any more and prisons are much more comfortable and healthy paces to work in – both for prisoners and staff.

What will be the next phase?  Will we see the introduction of self catering for prisoners?  Each prison having its own supermarket.  All prisons have there own version of the 'corner shop' where they can purchase food supplements and little luxuries to make life more bearable.  It is not too much of a step to provide a supermarket and the means for prisoners to prepare their own food.  Most of the catering facilities and prison shops are already privatised.  I am sure that ASDA or Sainsbury's or Walmart would jump at the chance of having an in-prison store with a captive clientèle of nearly 2000 every day.