Spinach is believed to be of Persian origin and introduced into Europe in the 15th century. Since the early 19th century, spinach has been a versatile and commonly used vegetable in the United States. Eating and preparing spinach is simple and easy, since it tastes good raw or cooked. Spinach can be found fresh, frozen, or canned; it can be easily incorporated into many dishes. Its versatility makes it easy to serve raw in salads or sandwiches or as a complement to soups, meat, fish, or other vegetable dishes. 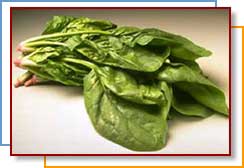 In addition to being tasty, spinach’s popularity stems from its high nutritional value. Not only is spinach low in calories, it is also a good source of iron and essential nutrients such as vitamins A and C, minerals, and fiber. Spinach also contains 3 grams of protein per serving.

Selection
At the supermarket, you can find spinach packaged fresh, canned, or frozen. Fresh spinach is usually found loose or bagged. For the best quality, select leaves that are green and crisp, with a nice fresh fragrance. Avoid leaves that are limp, damaged, or spotted. If you are in a rush, grab a bag of fresh, pre-washed spinach. The ready-to-eat packaging makes it easy to be on the go and still stay healthy

Storage
Fresh spinach should be dried and packed loosely in a cellophane or plastic bag and stored in the refrigerator crisper. If stored properly, it should last 3 or 4 days.

Flat or Smooth Leaf
Flat or smooth leaf spinach has unwrinkled, spade-shaped leaves that have a milder taste than the savoy. This variety is commonly used for canned and frozen spinach as well as for soups, baby foods, and other processed foods.

Savoy
Savoy has crinkly, dark green curly leaves. The texture is different from the flat leaf but tastes equally as good. Look for fresh bunches of savoy at your local market.

Fresh spinach is available all year. Major supplies come from Texas and California where it grows as a cool winter crop.

Preparation
Special Note
Iron and calcium in plant foods are not highly absorbed by the body. Spinach contains a chemical called oxalic acid, which binds with iron and calcium and reduces the absorption of these minerals. To improve iron absorption, spinach should be eaten with vitamin C-rich foods such as orange juice, tomatoes, or citrus fruit.

Spinach grows in sandy soil, so wash it thoroughly to get rid of the grainy, sandy particles. Make sure to tear off the stem. Separate the leaves, and place them in a large bowl of water. Gently wash leaves, and let the sand drift to the bottom of the bowl. Remove leaves from the water, and repeat the process with fresh water until the leaves are clean.

If spinach is to be eaten raw, dry it completely by using a salad spinner or by blotting it with paper towels. Slightly damp spinach can be steamed or microwaved without adding any additional water.

Blanching
Drop leaves into a large pot of boiling water. Once the leaves slightly wilt, drain and squeeze out excess moisture. This method is used to quick-cook spinach or to prepare it for sautĂ©ing, braising, or stuffing, and usually takes 2 to 5 minutes.

Microwaving
This method can be used instead of blanching. Place washed, slightly wet spinach in a microwavable dish, loosely cover, and cook until tender (4 to 7 minutes for Â˝ pound of spinach).

SautĂ©ing
Blanched spinach can be sautĂ©ed quickly with a quick spray of oil. If cooked in a non-stick pan, only a spray is needed for several cups of chopped spinach. Try adding some garlic for flavor.

Steaming
If you plan to steam the spinach, do not dry leaves after washing. Steamed spinach makes a great side dish and usually takes only 5 to 10 minutes.

Make Spinach Part of Your 5 A Day Plan