Samuel Goldwyn Films announced that the company is acquiring North American rights to writer/director Jason Wise’s SOMM, a documentary chronicling the lives of 4 men in the weeks leading up to the Master Sommelier exam. The court of Master Sommeliers is one of the world’s most prestigious, secretive, and exclusive organizations in the world of wine with under 200 candidates passing the Master level worldwide since its inception over 40 years ago.  Goldwyn’s announcement comes on the heels of the film playing to a standing ovation at the Santa Barbara International Film Festival.

With unprecedented access, SOMM takes the viewer on a humorous, emotional and illuminating look at a mysterious world very little is known about – the Court of Master Sommeliers and the much dreaded Master Sommelier exam. 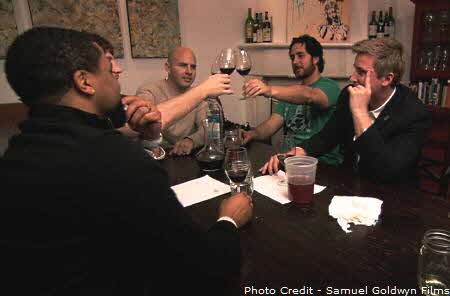 The film follows four candidates attempting to pass the prestigious Master Sommelier exam, a test with one of the lowest pass rates in the world.  The exam covers literally anything having to do with the entire world of wine and that is just the beginning.  Access to the Court of Master Sommeliers has always been strictly regulated and cameras have never been allowed anywhere near the exam…until now.

According to Peter Goldwyn, Senior Vice President of Samuel Goldwyn Films:  “Jason has made an extremely entertaining film that anyone who has ever stumbled through a restaurant wine list will love.  This is an amazing world and if you thought you knew something about wine you don’t.”

Filmmaker Jason Wise added:  “After being immersed in the world of wine for so long, we knew the time was right for a film about what it takes to become a sommelier. It’s an incredible honor to work with Samuel Goldwyn Films, and the unique approach to distribution they are planning is a perfect fit for SOMM.”